We introduce a new library for doing distributed hyperparameter optimization with Scikit-Learn estimators. We compare it to the existing Scikit-Learn implementations, and discuss when it may be useful compared to other approaches.

Last summer I spent some time experimenting with combining dask and scikit-learn (chronicled in this series of blog posts). The library that work produced was extremely alpha, and nothing really came out of it. Recently I picked this work up again, and am happy to say that we now have something I can be happy with. This involved a few major changes:

All these changes have led to a name change (previously was dask-learn). The new library is dask-searchcv. It can be installed via conda or pip:

In this post I'll give a brief overview of the library, and touch on when you might want to use it over other options.

Many machine learning algorithms have hyperparameters which can be tuned to improve the performance of the resulting estimator. A grid search is one way of optimizing these parameters — it works by doing a parameter sweep across a cartesian product of a subset of these parameters (the "grid"), and then choosing the best resulting estimator. Since this is fitting many independent estimators across the same set of data, it can be fairly easily parallelized.

We'll be reproducing this example. using the newsgroups dataset from the scikit-learn docs.

First we need to load the data:

Next, we'll build a pipeline to do the feature extraction and classification. This is composed of a CountVectorizer, a TfidfTransformer, and a SGDClassifier.

All of these take several parameters. We'll only do a grid search across a few of them:

In Scikit-Learn, a grid search is performed using the GridSearchCV class, and can (optionally) be automatically parallelized using joblib. Here we'll parallelize across 8 processes (the number of cores on my machine).

In this case, we'll use the distributed scheduler setup locally with 8 processes, each with a single thread. We choose this setup because:

Note the changes between using Scikit-Learn and Dask-SearchCV here are quite small:

Why is the dask version faster?

If you look at the times above, you'll note that the dask version was ~1.3X faster than the scikit-learn version. This is not because we have optimized any of the pieces of the Pipeline, or that there's a significant amount of overhead to joblib. The reason is simply that the dask version is doing less work.

Given a smaller grid

and the same pipeline as above, the Scikit-Learn version looks something like (simplified):

Looking closely, you can see that the Scikit-Learn version ends up fitting earlier steps in the pipeline multiple times with the same parameters and data. Due to the increased flexibility of Dask over Joblib, we're able to merge these tasks in the graph and only perform the fit step once for any parameter/data/estimator combination. For pipelines that have relatively expensive early steps, this can be a big win when performing a grid search.

Since Dask decouples the scheduler from the graph specification, we can easily switch from running on a single machine to running on a cluster with a quick change in scheduler. Here I've setup a cluster of 3 m4.2xlarge instances for the workers (each with 8 single-threaded processes), and another instance for the scheduler. This was easy to do with a single command using the dask-ec2 utility:

To switch to using the cluster instead of running locally, we just instantiate a new client, and then rerun:

Roughly a 3x speedup, which is what we'd expect given 3x more workers. By just switching out schedulers we were able to scale our grid search out across multiple workers for increased performance.

Below you can see the diagnostic plot for this run. These show the operations that each of 24 workers were doing over time. We can see that we're keeping the cluster fairly well saturated with work (blue) and not idle time (white). There's a fair bit of serialization (red), but the values being serialized are small, so this is relatively cheap to do. Note that this plot is also a bit misleading, as the red boxes are drawn on top of the running tasks, making it look worse than it really is. 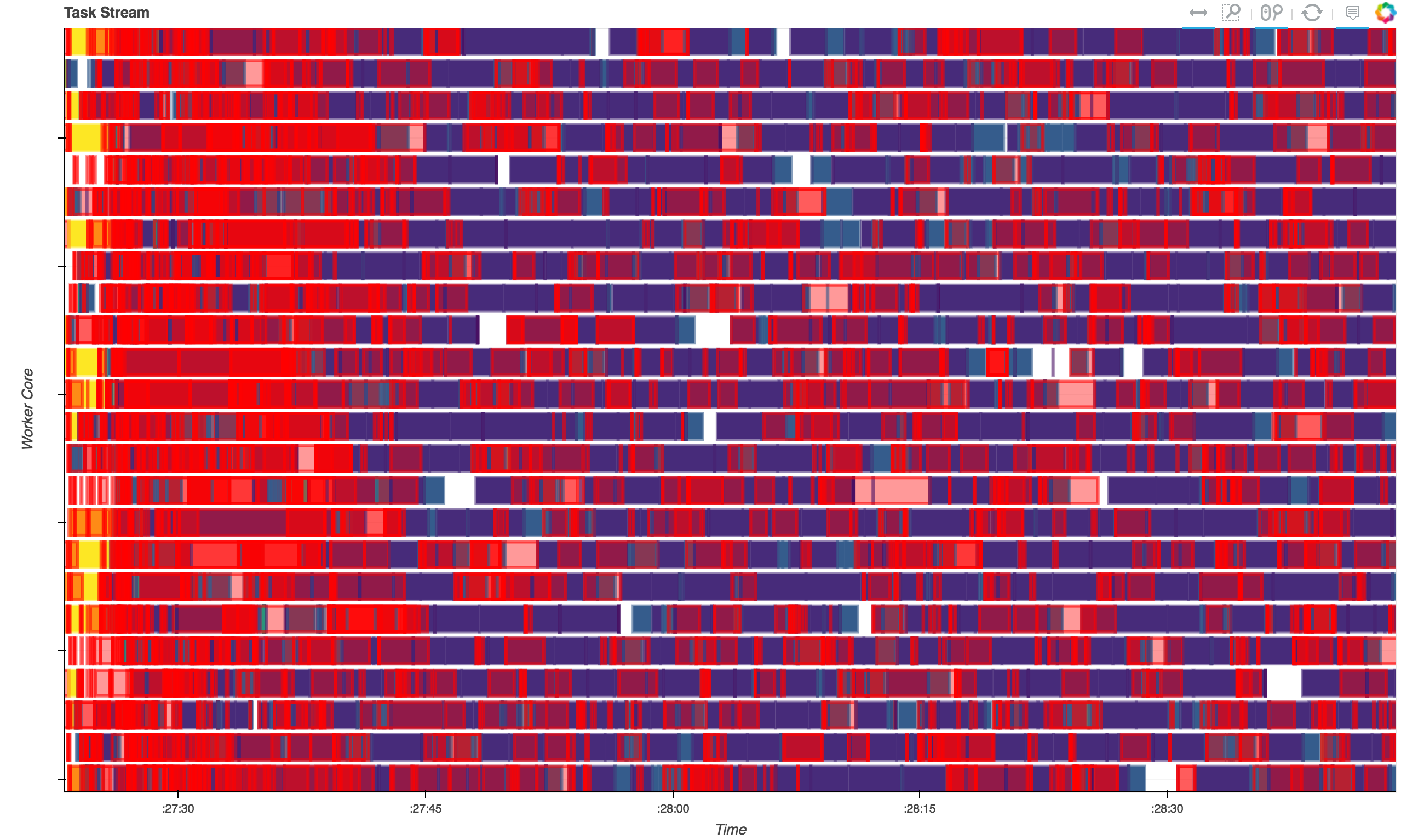 For comparison, we'll also run the Scikit-Learn grid search using joblib with the dask.distributed backend. This is also only a few lines changed:

In this post we performed 4 different grid searches over a pipeline:

Looking at these numbers we can see that both the Scikit-Learn and Dask-SearchCV implementations scale as more cores are added. However, the Dask-SearchCV implementation is faster in both cases because it's able to merge redundant calls to fit and can avoid unnecessary work. For this simple pipeline this saves only a minute or two, but for more expensive transformations or larger grids the savings may be substantial.

When is this useful?

Currently we just mirror the Scikit-Learn classes GridSearchCV and RandomizedSearchCV for doing passive searches through a parameter space. While we can handle very large grids at some point switching to an active search method might be best. Something like this could be built up using the asynchronous methods in dask.distributed, and I think would be fun to work on. If you have knowledge in this domain, please weigh in on the related issue.

This work is supported by Continuum Analytics, the XDATA program, and the Data Driven Discovery Initiative from the Moore Foundation. Thanks also to Matthew Rocklin and Will Warner for feedback on drafts of this post.