A Farewell to Anaconda

In the spring of 2015 I quit my graduate program and moved to TX to work for Anaconda (then Continuum Analytics). Graduate school hadn't been great for my mental health, and increasingly I was finding the thing I liked most about my research was the software development aspects of it. I was thrilled to be hired to help maintain the Python scientific ecosystem full time. It was my dream job, which is why it feels so hard to say that it's time to move on.

Today is my last day at Anaconda. I'm not leaving for any particular reason, it just feels like it's time. I've never quit a job before, every job I've had has had a set end time (e.g. "I'm going back to grad school" or "we can't dig holes anymore because the ground is frozen"). It feels weird, but I'm excited for what's next.

I'm proud of the work I helped accomplish at Anaconda. We helped create (and maintain) open source software that is used by thousands. Here I thought I'd recap a few of my highlights.

Most of my work for the last 5 years has been related (in one way or another) to Dask. I first started contributing while in graduate school (~5 years ago today!). I had met Matt Rocklin the previous fall at the Google Summer of Code reunion, where he nerd-sniped me into what ended up being a multi-month obsession with term-rewriting systems (I was interested in adding one to SymPy at the time). So the following spring, when Dask needed some rewrite-rules for it's optimizer I was happy to help). Thus began a career of hopelessly understimating how long it takes to do things.

The code for this still lives in dask.rewrite (docs here), although it's no longer used internally. Dask has grown up a lot since then. It's now a whole ecosystem, with multiple companies invested in its development and maintenance.

I'm still planning on continuuing work on Dask outside of Anaconda, and am excited to see how the project evolves over the next 5 years.

The ideas behind what would become Datashader (then called "abstract rendering") were first described to me at a conference happy hour by Peter Wang. It sounded interesting - a mix of dask, numba and bokeh - the perfect demonstration of all the neat libraries Continuum was helping develop at the time. I took a few weeks off from Dask development and helped write the first version (hopefully most of my code has been rewritten at this point). It made some pretty plots (here's an example with NYC Census data): 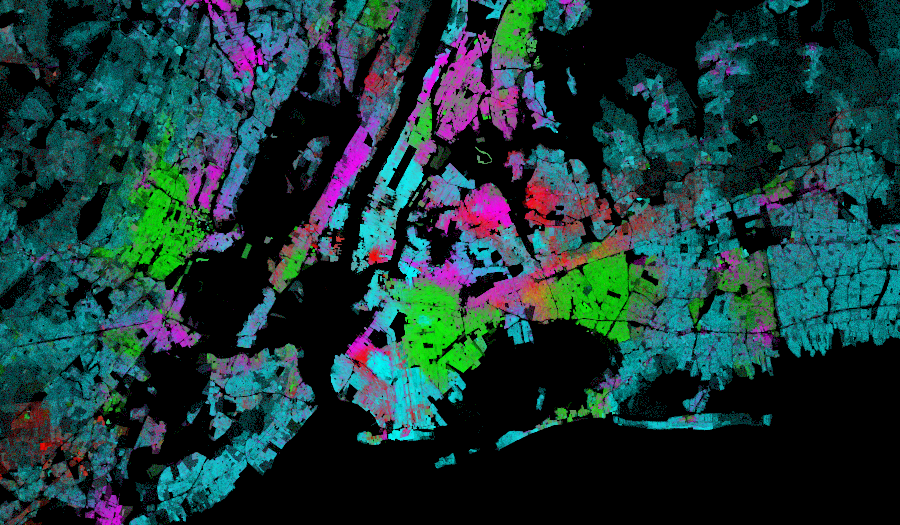 Datashader was my first real experience developing a production library from scratch. It worked, it was speedy, but I spent too long waffling about how the API should be written (I think I rewrote the user-facing API 3-4 times). This whole experience helped me learn that sometimes it's best to get things in front of users and iterate, rather than developing "the perfect API" from the get-go.

During my time at Anaconda I did a few consulting projects deploying and using Dask, mostly at large institutions. This was a useful exercise, as it revealed many pain points when integrating with enterprise-y systems (read Hadoop). I think it's easy for open-source devs to miss key issues if they're not also direct users of their software. Things you might not expect to cause issues often do.

One issue that kept cropping up was Hadoop integration. Many of our customers had purchased large Hadoop/YARN clusters, and we had no way to run our software on them. 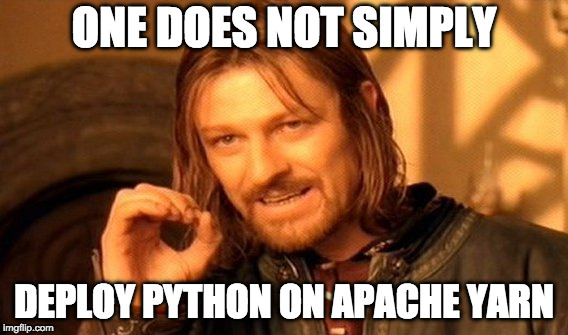 While we primarily wanted to be able to run Dask on these clusters, we also wanted a general solution. This led to Skein, a (hopefully) user-friendly tool for deploying and managing applications on Hadoop/YARN (blogpost here). While Skein was developed primarily for use in dask-yarn, it's also used by several other projects:

Continuuing my rage against enterprise systems, I grew frustrated with Cloudera's datascience workbench and developed a way to natively run JupyterHub on Hadoop. It works, there's docs and everything. I even made a walkthrough video:

JupyterHub is a wonderfully designed project and is a pleasure to work on. The Jupyter community is also a model of what community-driven development can accomplish. May Dask's community one day be equally be as open and supportive.

Dask's existing deployment solutions work well, but are inherently decentralized. They require users to have direct access to the underlying cluster system (e.g. Kubernetes RBAC permissions), as well as network access to all nodes in the cluster (firewalls be damned). Likewise, users are expected to have some knowledge of the underlying systems (e.g. K8s pod specs), which makes onboarding trickier.

Dask-Gateway is our attempt at providing a managed solution. It allows users to launch and use Dask clusters in a shared, centrally managed cluster environment, without requiring users to have knowledge of or direct access to the underlying cluster backend (e.g. Kubernetes, Hadoop/YARN, HPC Job queues, etc…). In short, "Dask clusters as a service".

Dask-Gateway feels like a culmination of the previous work I've done:

This project (like any project) has been a great opportunity to learn. Before this I had never written a serious web application, now I have opinions about Python asyncio server frameworks. I also got a lot of experience working with Enterprise Users™ whose needs and security restrictions often differ from the usual users I encounter.

Dask-Gateway is currently deployed at a handful of companies, as well as actively used as part of the Pangeo Project. I just finished a major rewrite of the server internals, and plan to keep developing it in the coming months.

The projects discussed above don't encompass everything I've done while working at Anaconda, but they're a sampling of my favorites. My job for the past 5 years has been to maintain and better the Python ecosystem, and in that I hope I've been successful.

But Anaconda is more than just the software we made along the way. It's a company full of brilliant and kind people who care about their work and the community they're supporting. I will miss the people most.

Thanks Anaconda for a great 5 years, I truly wish you all the best.

I'm excited to say I'm going to work at Prefect. There (among a myriad of other things), I hope to improve Prefect's integration with Dask. I'll also be given time to continue maintenance and development of the Dask ecosystem (bringing Prefect into the fold of companies maintaining Dask :) ).

Before then I'm taking a few weeks off to relax. I'm returning my work laptop to Anaconda today, and will only have access to my old college laptop (2 GiB of RAM!) until my new job starts. Call it a forced detox from OSS development. I have a few woodworking projects and books to keep me busy, and am looking forward to the break.